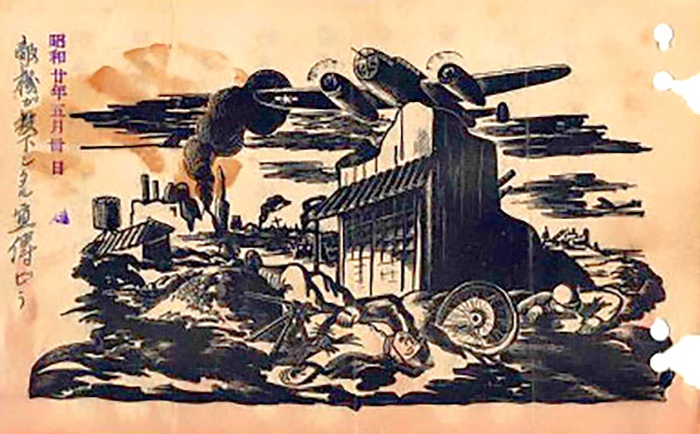 On March 9/10, 1945, the United State Army Air Force killed over one hundred thousand people in what was arguably the biggest attack on an urban environment by any WW II combatant nation (the atomic bombs included). The B-29 formations used a mixture of high explosives and napalm to incinerate the working-class districts of the Japanese capital, causing untold suffering among the civilian population on the ground. The bombers, flying low on Curtis LeMay – the US raids commander’s – orders, were so close to the carnage, when the returning B-29s touched down, they were fumigated to dissipate the smell of burning flesh. In the aftermath of the attack, Mochizuki Masako, a 36-year-old housewife in Tokyo’s Honjō Ward, recalled the army piling corpses in trucks, where she found her sister and niece. Such horrible scenes and suffering notwithstanding, and despite the earnest effort of countless activists, writers, and others, the air-raid, as well as the larger fire-bombing campaign, is hardly present in the Japanese collective memory or global histories of the war, where it is usually overshadowed by the bombing of Hiroshima and Nagasaki, and the Japanese own atrocities on the mainland.

In our round table panel we ask why, seventy-seven years after the bombing, is there still is relatively little attention paid to the fire raids in public conversations about World War II? How does it relate to the Atomic bombings and Japanese war crimes (including the murder of Koreans after the Kanto Earthquake)? What was its long-term impact, how has it been remembered and memorialized, and in what ways has it impacted culture in the seven and a half decades since 1945? As current shelling of civilian areas in Ukraine reminds us, what David Fedman and Cary Karacas called “urbacide,” (the deliberate destruction of cities), is still present in military thinking in the 21st century, making this particular anniversary of the air raids as relevant and urgent as ever.

After registering, you will receive a confirmation email containing information about joining the meeting.

Professor Aaron William Moore is the Handa Chair of Japanese-Chinese Relations at the University of Edinburgh. He received his PhD from Princeton University in 2006 and held post-doctoral positions at Harvard and Oxford University. In 2010 he was appointed as a lecturer in the History Department at the University of Manchester, where he primarily taught modern Chinese history for seven years and was made Senior Lecturer. He has presented his research as invited lecturer, keynote speaker, and chair around the world, especially in Britain and continental Europe, North America, and East Asia. He is the author of many articles on Chinese and Japanese wartime childhood and youth, as well as two books: Writing War (2013, Harvard), which analysed over 200 combat soldiers’ diaries from China, Japan, and the United States, and Bombing the City (2018, Cambridge), which compared the air raid experiences of civilians in British and Japanese regional cities. In addition to the history of early East Asian science fiction, he is currently working on a book about the global experiences of wartime youth entitled, What Can Be Said, a translation volume of works by the critical theorist Hirabayashi Hatsunosuke, and an edited volume on the early history of the People’s Republic of China, entitled How Maoism Was Made (Oxford, forthcoming). In 2014 he was awarded the Leverhulme Prize for his work on transnational and comparative history.  Website: https://www.ed.ac.uk/profile/professor-aaron-william-moore

Sandra Wilson is a historian of modern Japan and teaches at Murdoch University, Australia. She has written about Japanese society and politics in the 1930s and 1940s, the history of Japanese nationalism, and military violence and war criminals in the Asian theatre of the Second World War. Among her publications are The Manchurian Crisis and Japanese Society, 1931-33 (Routledge, 2002) and, with Robert Cribb, Beatrice Trefalt and Dean Aszkielowicz, Japanese War Criminals: the Politics of Justice After the Second World War (Columbia University Press, 2017; winner of the NSW Premier’s Prize for History (General History Category), 2017). Her most recent articles are ‘Why were there no war crimes trials for the Korean War?’, Journal of Global History (2021) and ‘Interpreters as Japanese war criminals’, War in History (2021).  Website: http://profiles.murdoch.edu.au/myprofile/sandra-wilson/

Ran Zwigenberg is Associate Professor at Pennsylvania State University. His research focuses on modern Japanese and European history, with a specialization in memory and heritage history. He has taught and lectured in the United States, Europe, Israel, and Japan, and published on issues of war memory, heritage, atomic energy, psychiatry, and survivor politics. Zwigenberg’s first book, Hiroshima: The Origins of Global Memory Culture (Cambridge University Press, 2014), was the winner of the 2016 Association for Asian Studies’ John W. Hall book award. His second, co-authored book, Japan’s Castles: Citadels of Modernity in War and Peace, came out with Cambridge University Press in 2019. He is currently working on a manuscript on the reaction of psychiatry and its allied professions to the A-bomb.  Website: https://history.la.psu.edu/directory/ruz12

Atsuko Shigesawa is associate professor at Kobe City University of Foreign Studies in Japan. She earned her Ph.D. in 2019 in the Department of International Studies at Hiroshima City University for her dissertation entitled “Demystifying the Atomic Bomb: The U.S. Strategic Bombing Survey Goes to Hiroshima and Nagasaki.” She was a Scholar in Residence at American University in Washington D.C. in 2014-2015, sponsored by the Fulbright Dissertation Program, and is the author of Genbaku to ken-etsu: Amerikajin kishatachi ga mita Hiroshima, Nagasaki, (2010), which discusses American censorship during WWII and its influence on the coverage by American journalists of Hiroshima and Nagasaki following the end of the war.

Date & Time:
Wednesday, March 9   18:00 - 20:00
Moderator:
Kyle Cleveland (ICAS Associate Director)
Registration:
Registration Required : Upon registration you will be sent an email that includes a link for direct access into the zoom meeting. Please contact Kyle Cleveland (kyle@temple.edu) if you have any questions.

This event is organized by Institute of Contemporary Asian Studies (ICAS).